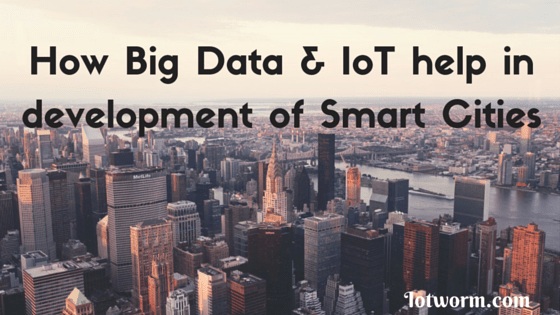 Smart cities is a concept which has been in much debate lately and if everything goes as planned, it is needless to say that we will see a lot of cities turning “smarter”. So what exactly makes a city smart? For beginners, smart city is basically an umbrella term used for the purpose of designing a city, especially the urban areas, for making it more agile, sustainable as well as liveable for the commoners. Starting from the roads, traffic lights to the sewage system, everything in a smart city will be combined together in a harmonious manner to make human lives better and healthier over time. All of this, by the way, is not possible without the concept of Internet of Things as well as big data coming together!

The concept of smart cities can benefit a lot from big data as well as the technological scenario of Internet of Things technology. This means that cities will be able to fetch more useful response with the help of big data, while IoT will make sure that there is ample room for all the physical aspects of a city to be connected with each other over a common network.

When the Internet of Things technology will come together with big data, it will make way for cities to be identified as future smart cities. These smart cities can fundamentally change our professional as well as personal lives at so many different levels, such as less pollution, garbage management, better parking facility and more energy savings to say the least! With the current ideology of turning the entire world into several different smart cities, big data and the Internet of Things technology are the only ideologies that have the power to drive this implementation.

How Big Data and Internet of Things can make a difference?

The quantity of traffic which should be allowed to roll out during a particular time, the time for the trash cans to be picked up, the amount of water being consumed each day, everything can be analysed and regulated with the help of big data and IoT. All these information can be effectively collected with the help of sensors, cameras, smart devices and wearable gadgets.

One of the biggest perks of creating smart cities is that it will reduce the wastage of resources to a very large extent. Lesser wastage of water, lesser congested streets, lesser energy/ power consumption, lesser pollution and fewer problems will certainly be a boon for the commoners living across these smart cities. In fact, there are several smart cities around the world which have successfully tackled problems like sewage treatment, water theft, pollution and traffic congestion over time. This means that the Internet of Things technology when combined with big data can help in achieving the impossible! Cities like New York and Los Angeles have already started to reap in the benefits of IoT and big data and before we know, these cities may also get Wi-Fi!!

How can big data and IoT contribute to smart cities?

With issues like traffic control, waste management and energy conservation benefiting from the concept of Internet of Things and big data, it is needless to say that smart cities will certainly benefit from this technological reform.

Why Internet of Things technology won't change much in 2016?

IIoT News
The well-known provider of sensing solution, MEMSIC, launched their new product MMC3630KJ. It is the magnetometer or simply…
IIoT News
Housing for trade fair light 2016 has now been over and as per a number of reports, the…